Our friends at Good Jobs New York have a special section that follows the Sandy money trail. New York City will soon release the third and final amendment ($639,056,000) of  NYC’s  CDBG grant allotted to our city for Sandy recovery. You can track it by following them here. Plans for a storm resilient park in Greenpoint were highlighted in their report this week.

Proof of Loss deadline is this Wednesday 10/29, but we recommend that you get it in by Tuesday if you haven’t already filed your claims.

Floodhelpny.org has everything you want to know about flood insurance and your flood risk. It’s an easy to use resource from The Center for New York City Neighborhoods who have also published  Rising Tides, Rising Costs reveals how rising flood insurance costs and increased flood risk threaten both the housing affordability and safety of the over 400,000 New Yorkers who live in neighborhoods at high risk of flooding along and around New York City’s 520 miles of coastline.

Once again the Sandy Neighborhood Design Help Desk is reaching out in specific Brooklyn neighborhoods and begins in Canarsie on 10/28. The flyer is below. Appointments are recommended. 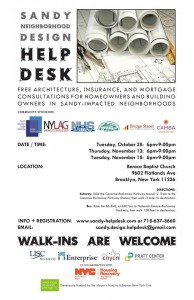 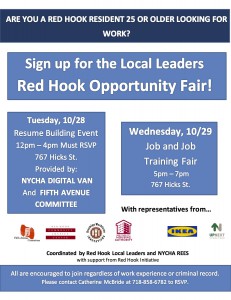