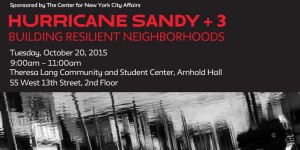 As the third anniversary of Sandy’s deadly landfall nears, the Center for New York City Affairs asks: What’s the post-storm state of social infrastructure in the areas where the storm hit hardest? Have government agencies and philanthropies seized – or missed – chances to strengthen grassroots groups in the storm’s aftermath? And how can the on-going post-Sandy recovery do more to help local residents increase the sum of opportunity, dignity, and hope in their neighborhoods?

Daniel Zarrilli, director of the Mayor’s Office of Recovery and Resiliency.